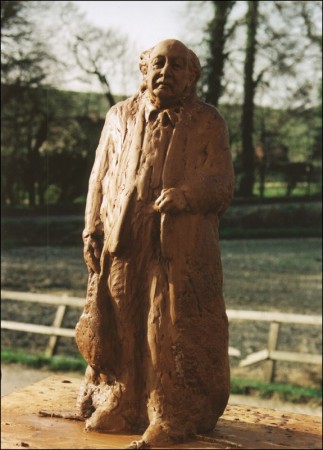 An appropriate sculptural tribute to Sir John Betjeman should be a piece of poetry in its own right.

A large rambling Sarsen stone, reminiscent of a portly, disheveled character. On closer inspection, a portrait of Betjeman becomes apparent, emerging as you walk around to the other side of the stone.

Betjeman was Poet Laureate and an important social commentator of post war Britain. He was an aesthete who deplored elitism; a conservationist who sought the best in modernity; a populist with social aspirations; an affectionate satirist; and a sensitive and vulnerable rock for many.

A sculptural tribute to Sir John Betjeman should be more than just a 'statue' of a man. It must intrigue and gently evoke the spirit of this very complex man.

For nearly forty years, Wantage and the surrounding downlands, were his home and respite. Sarsen stones are drawn from the chalk downlands. The name Sarsen comes from 'Saracen', apparently meaning 'foreign'. Betjeman felt an outsider, possibly for no other reason than his foreign sounding name during the difficult years of the war.

Sarsens are made of chalk, chemically attracted to a 'foreign body'; they are one of the most durable and impenetrable of stones. It is well known amongst downland farmers that stones - even the size of a man - can 'work' their way to the surface and reveal themselves between one ploughing season and the next. Their persistence is mysterious, a very evocative metaphor for Betjeman.