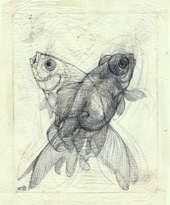 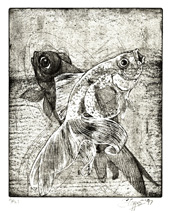 It was a great pleasure to return to etching in 1995 after a gap of nearly twenty year. Over the next five years I built up a portfolio of over a hundred editioned plates - ranging from sketchbook work to intricate double-bite, hand coloured and a la poupee prints.

There is huge satisfaction in such a process based form of drawing. You start with a scrappy looking sketch which, taken through a number of techniques, provides you with the opportunity to select, improve and develop an image.

ETCHING is an ancient ‘intaglio’ print-making technique, meaning that the paper receives the ink from the incised lines and not from the surface of the plate.

An Intaglio print can be normally recognised by the plate mark and by the fact that the ink stands up from the paper in a very slight relief, which can be often detected by touch. 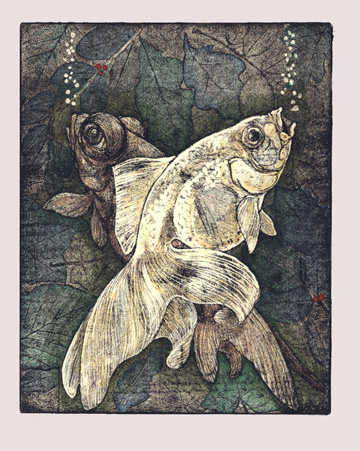 This etchings was produced using the ‘soft ground’ method:

A wax ‘ground’ is rolled onto the surface of a metal plate, (in this case copper). The image is drawn directly on the plate through tissue paper. When the tissue is pulled off, the plate is then submersed in a bath of Ferric Chloride. Where the drawn lines have exposed the bare metal, the chemical is allowed to ‘bite’ lines or texture into the copper.

The ink is pressed into the lines with a pad called a "dabber", and wiped off the top surface with muslin or scrim.

Damp etching paper is laid onto the inked plate. A print is taken by passing the plate and paper together through a roller press. The pressure must be strong enough to force the damp paper into the lines and lift the ink out onto the paper.

A number of etchings can be printed in this way - the number is set initially by the size of the edition.

The coloured prints are made in one of two ways:

The first, HAND COLOURED, is achieved simply by painting a print with watercolour.

The other method is known as A LA POUPEE. This is a technique by which two or more colors are applied to a single plate, usually by finger, cotton buds or rolled up scrim. Each inking enables the artist to print one copy only. Complex prints can take hours to print each time.

Most of the etchings you see are drawn from life, directly onto the plate. They are printed in the studio, the edition sizes are fairly small, and each print is more or less unique.

?tch v. from the German word, atsen, meaning to eat or corrode, a process by which an image is eaten into metal by acid through a waxy coat, for the purpose of printing from it.

The etching process as applied to printmaking is believed to have been invented by Daniel Hopfer (circa 1470-1536) of Augsburg, Germany. Hopfer was a craftsman who decorated armour in this way, and applied the method to printmaking, using iron plates (many of which are still extant).

Hand-colouring - literally painted with watercolour onto the individual print.A la Poupee - Intaglio technique by which two or more colors are applied to a single plate, usually by finger, cotton buds or rolled up scrim. Each inking enables the artist to print one copy only.

Bon a tirer (BAT) - The ‘right to print’ proof, designated by the artists, against which all others are to match.

Cancellation Proof - Proof from a defaced or marked plate, block, or stone to indicate the end of an edition.

Chine colle - Technique for attaching thin pieces of colored paper to the larter printing paper, when put through the press, the inked image prints on both sheets.

Chop - Embossed mark of a printer, publisher, artist, or collector on the edge of a print.

Edition - Number of impressions pulled by or under the supervision of the artist, usually numbered and signed, excluding artist's proofs, trial proofs, and any others outside the edition.

Hand-made Paper - Sheet of paper made individually, characterized by an irregular or deckled edge, which contributes to the unique appearance of the print.

Iris Giclée - Iris printing is a relatively new and exciting printmaking technique and is the first digital process accepted and collected by major museums. It is a process that still rises above the emerging digital techniques.

Limited Edition - The practice of limiting the number of impressions of a print is a relatively recent development, first seen in the late 19th century. An artist number such as 6/20 indicates that the impression was the 6th out of 20 prints. When the edition is complete the plate or block was defaced and known as canceling.

Numbering - The number of the particular print and the size of the edition are indicated under the printed image on the left side, i.e., 4/20.

Print - Image on paper or other material obtained from an inked block, plate, collage or stone by applying pressure. Also called and impression.

Soft Ground - Acid-resistant coating used in etching, containing tallow to prevent it from hardening, is applied to the plate. An image is created by drawing firmly on a tissue paper laid over it, making a clear impression on the ground. When the paper is lifted, the marked areas pull away with it, and the plate is then bitten with acid. A soft ground etched line can simulate the effect of a chalk or pencil line.