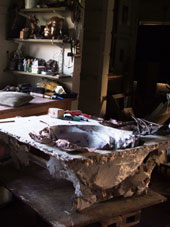 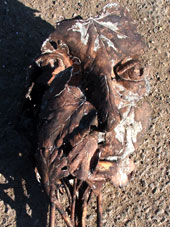 Having found the level of practical tuition on my degree course very disappointing, I took myself off to evening classes at Sydney Place in Bath. Initially I was taught Silver Smithing by Dave Tucker, whose method of teaching was extremely inspiring. After a while he suggested I join John Huggins’ Bronze Casting course, down in the basement. This was a revelation, and the beginning of a life long love of bronze. One way or another I have been involved with bronze casting since those college days. Not long after leaving college, I was working as an ‘enlarger’ at Morris Singer Foundry in Basingstoke, and have worked in, or used many of the other foundries in England at one time or another.

The technique of LOST WAX BRONZE CASTING is one of Man's earliest technologies dating back at least 6000 years. The first bronze was probably cast between the Black Sea and the Persian Gulf around 2,000 BC. Certain elements of the “lost wax” technique have indeed been refined, yet today bronze casting remains essentially the same as it was in during the Acadian period:

Craftsmen today have some technical advantages over those of past times with welding equipment and power tools, efficient gas or oil burners and flexible rubbers for moulding. However, today's technique is still heavily dependant upon many hours of skilled labour and remains a 'low tech, high skill' craft.

MAKING OF THE ENGLISH PEAR

THE ENGLISH PEAR was made in an unusual way, but it still demonstrates the principles behind making and casting a bronze.

STAGE 1 - Polystyrene and chicken wire were formed to make an ‘armature’ for modelling the first of two clay heads in deep relief. 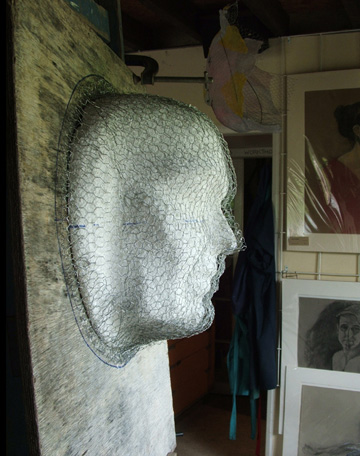 STAGE 2 - A simple plaster mould was made with ‘legs’ to enable it to be free-standing. 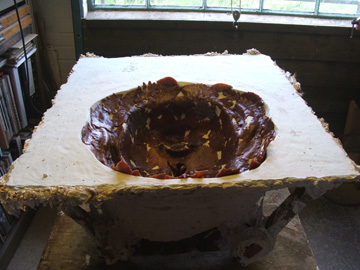 STAGE 3 - Wax leaves were made and pushed into the mould. The leaves were divided into sections of appropriate size and shape to fit the available casting flasks. 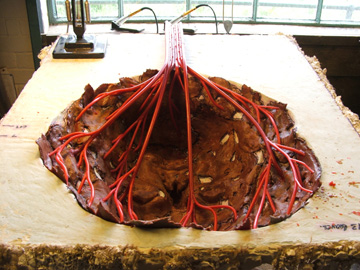 STAGE 4 - Wax ‘sprues’ were attached to each section in such a way as to become branches of the tree when cast, as well as guides to fit the two halves together. 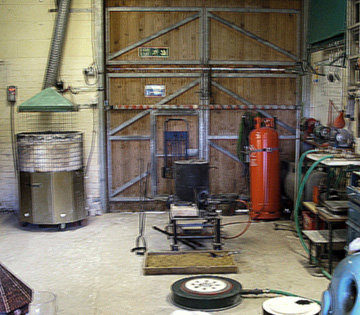 STAGE 5 - The wax sections were taken out of the mould and placed in casting flasks, plaster was poured around the wax, and the flask was put in the kiln up-side-down and fired so that the wax could melt out of the bottom. The firing took about 34 hours. 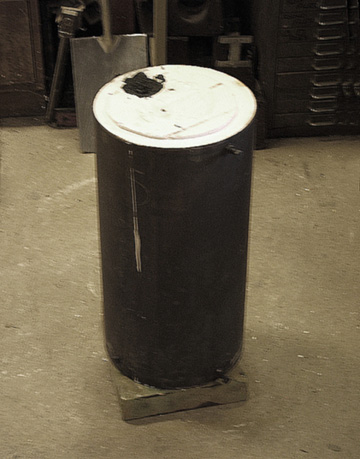 STAGE 6 - When the flask (See above) was ‘cooked’ the bronze was melted and poured into the fireproof mould at about 1030° - 1065°C. Once each flask was cooled, breaking out began. See below 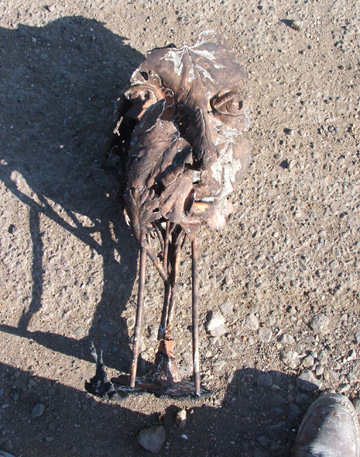 STAGE 7 - When the pieces were ‘fettled’, the re-assembly and fitting together of the sections could begin, using the mould as the former. 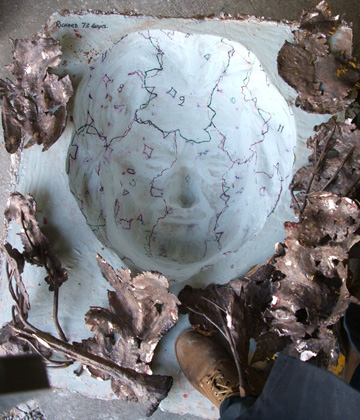 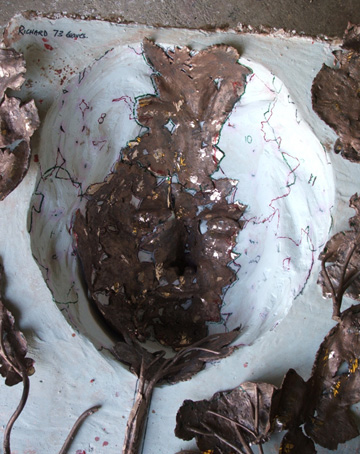 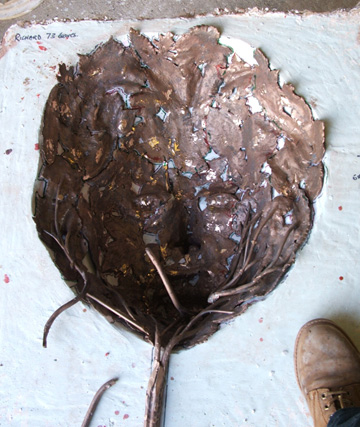 STAGE 8 - When both faces were assembled and welded, the two halves could be brought together in the hopes that all the preparation and measurements had worked and they fitted each other! 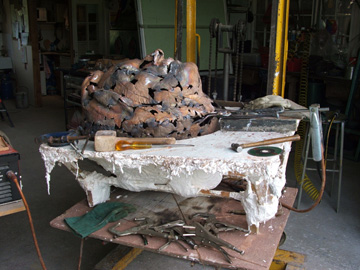 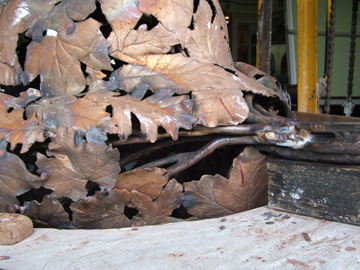 STAGE 9 - When they fitted sufficiently well, spare leaves were welded on to bridge any gaps, then the ‘trunks’ (in fact the main feeds and pour cups used to cast each section) were welded together. As this section measures more than 14cm across, it tried my brave and venerable little welder to its limits! 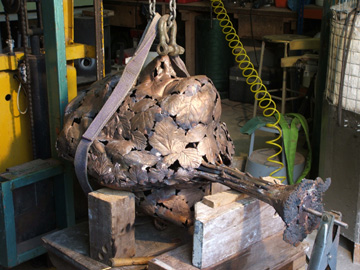 SPRUE - rods of wax which when attached to the wax cast of the sculpture will form the channels through which the bronze can be poured when the wax is melted out of the fireproof mould.

FETTLE - to cut the sprues off a fresh casting and do any crude ‘chasing’ ready for inspection, grit blasting, or for the fine ‘chasing’ work to begin.

CHASING - literally to work the surface of metal. Originally from silversmithing where a design is ‘chased’ into the surface of the silver with an engraving tool. This is possible in the case of bronze, but besides being able to grind or file it, the metal is so maleable that it is possible to push the metal around and re-model it with the use of punches (‘chasing tools’) and chisels.

TIG WELDING - Tungsten inert gas welding (also known as Gas tungsten arc welding (GTAW)), is an arc welding technique that uses a nonconsumable tungsten electrode to produce the weld. The weld area is protected from atmospheric contamination by a shielding gas (usually an inert gas such as argon), and a filler metal is normally used, though some welds, known as autogenous welds, do not require it. A constant-current welding power supply produces energy which is conducted across the arc through a column of highly ionized gas and metal vapors known as a plasma.

TIG is most commonly used to weld thin sections of stainless steel and light metals such as aluminum, magnesium, and copper alloys. The technique grants the operator greater control over the weld than competing procedures such as shielded metal arc welding and gas metal arc welding, allowing for stronger, higher quality welds. However, TIG is comparatively more complex and difficult to master, and furthermore, it is significantly slower than most other welding techniques. A related technique, plasma arc welding, uses a slightly different welding torch to create a more focused welding arc and as a result is often automated.