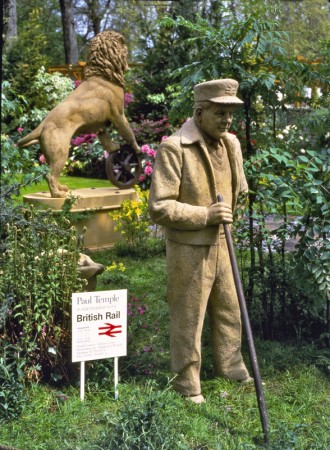 THE GARDENER AND THE TRUANT LION was conceived initially as part of a scheme for Chelsea Flower Show 1986 - British Rail in Partnership with landscape gardener Paul Temple. It was then loaned to the National Garden Festival '86 in Stoke-on-Trent, before permanently sited at Stoke Mandeville Station - quite a paripatetic existence for over two and half tons of concrete!

The LIONS are a pastiche on traditional garden statuary, the motif was borrowed from the post-war British Rail logo of the Lion and Wheel. However, the piece is brought into the contemporary world by its siting, materials, and the relationship of the elements.

The DUTIFUL LION on his plinth fulfils his role smugly, while the TRUANT LION has abandoned his post and is shamelessly foraging among the plants. The GARDENER, blissfully unaware, is Leading Railman Bernard Carter, from 'Best Kept' Stoke Mandeville Station.

There is a dream-like quality to the piece. The on-looker is privy to the childish belief that when you are not watching, inanimate objects have a life of their own. The garden is a refuge against the fierce pace of contemporary life.

Bernard Carter was one of the old school of Railmen. He loved his work, he loved his station, but most of all he loved his passengers. He had been at Stoke Mandeville for at least 15 years before he was selected to become part of this sculpture.

The work follows another of Sioban's favourite themes - the unsung hero. Bernard Carter, like so many quietly dedicated people, looked after his station lovingly for years. He had not the slightest expectation of reward beyond his daily wage. There now stands a monument to his efforts - which unfortunately, has already outlived him.

This piece was commissioned.

This piece can be viewed by the public.