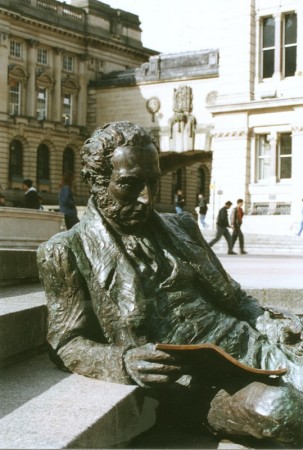 In collaboration with sculptor and letterer FIONA PEEVER.

A memorial to THOMAS ATTWOOD - Birmingham`s first MP, an important reformer, and a man of the people.

The piece was presented to the City of Birmingham by PRISCILLA MITCHELL, Thomas Attwood's Great Great Granddaughter. (Priscilla instigated and funded the commission, which the City orchestrated.)

THE BIRMINGHAM MAN is an allegory of an unsung hero. A figure is usually considered to be a focal point - but in this case he is not easily visible from many parts of this busy city centre square. Thomas Attwood has to be 'discovered'. The fulcrum is the SOAPBOX, which provides a symbol of public oration. It makes subtle use of its prime position alongside the flamboyant Victorian Chamberlain Monument, and asks the viewer to be curious about the man and his ideas.

The SOAPBOX is often the first part of the sculpture to be noticed. The passers-by find themselves reading the beautifully inscribed bronze pages scattered round the box, outlining the causes Attwood championed. Then they realise there is a figure reclining on the steps, sitting just out of the main viewpoint. This figure is the man behind the ideas - Thomas Attwood. He sits on ground level. He is completely accessible to everyday people, as was his way in life.

The Page in his hand reads: "Prosperity Restored"; the pages around the box say: "Demand for Change", "The Remedy", "Votes For All"; and the two nearer Attwood read: "Full Employment" and "Free Trade".

The lettered steps beside him represent his ideas which came to pass. They read: "Reform", "The Vote", and "Prosperity" and have become the fabric of Birmingham. We owe a great deal to him for the democracy we enjoy today.

Although the BIRMINGHAM MAN is seen as a traditional sculpture, it is presented in an entirely contemporary context. The message behind the sculpture is read through its position and layout, within Chamberlain Square.

This piece was commissioned.

This piece can be viewed by the public.