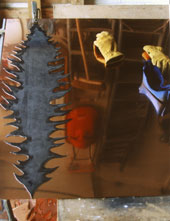 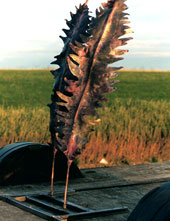 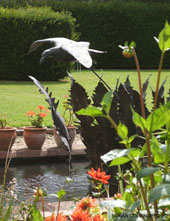 It was first in 1991 that I made a copper weather vain, GOLFISH, as a collaborative sculpture with local blacksmith Daryl Ford. This piece was largely soldered together. The most common way to join thin sheet copper is to solder or braze. About seven years later I embarked on a series of work to explore the use of welded sheet copper to construct sculpture. My idea was to make work on a large scale, in a direct method, which was light and strong enough to ‘fly’, whilst giving the same impression of solidity and form which is found in bronze work. In order to do this I set out to see what would happen if you treated thin copper sheet as if it were bronze - to see if it was possible to weld and ‘dress back’ the metal, and then patinate it in order to hide the welding work. In essence, to make a sculpture in copper so that the viewer would not be distracted by how it was made. This was an entirely new endeavour. I started to anneal and beat sheets of copper into relief panels, and then sought help with the welding from an experienced welder, Adrian Dorney, who was running a course in at Lackham Agricultural college.

THE DANCING PARTNERS was the first copper piece to be made to commission. I had designed a large pair of fish, dancing on their tails, out of beaten and welded copper. It proved to be quite a challenge. The technique took about three years of research and experimentation before the piece could be completed - fortunately I had extremely patient clients!

These two (good) fishes were made up of panels of copper sheet beaten into shape using a giant pitch block and sand bags. The method of beating is called repoussee: where the beating is done first from one side and then the other, and so on. 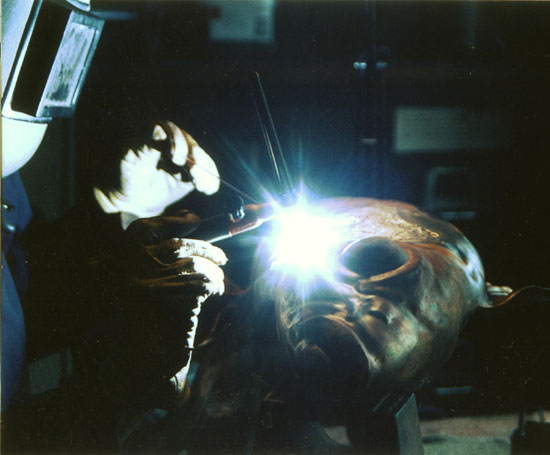 A stainless steel rod is welded into the structure of the fish during the early stages of the work. This is the fixing which allows the fish be suspended in space - and so apparently ‘dance’ on the tip of its tail. 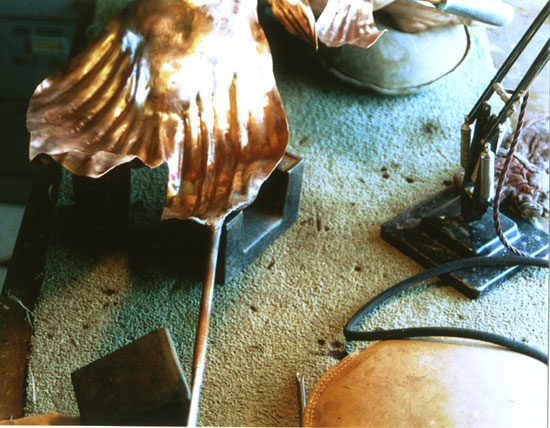 The panels were held in position with the help of a riveted system used for car restoration, and then they were welded together and ‘dressed’ back so the joints become part of the ‘modelled’ surface. The lightness of the material and the thinness of the steel rod means that the gentle movement of the fountain or a passing breeze can cause the fish to sway or ‘dance’. 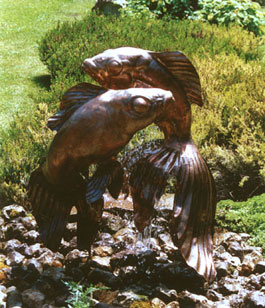 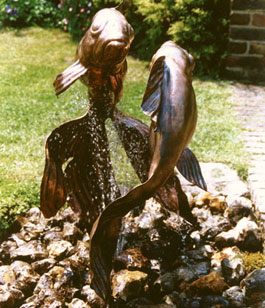 COPPER - Many common metals are alloyed with copper to produce the various copper alloys. The most common alloying elements are aluminum, nickel, silicon, tin, and zinc. Other elements and metals are alloyed in small quantities to improve certain material characteristics, such as corrosion resistance or machinability. Copper and its alloys are divided into nine major groups.

TIG WELDING - Tungsten inert gas welding is an arc welding technique that uses a nonconsumable tungsten electrode to produce the weld. The weld area is protected from atmospheric contamination by a shielding gas (usually an inert gas such as argon), and a filler metal is normally used, though some welds, known as autogenous welds, do not require it. A constant-current welding power supply produces energy which is conducted across the arc through a column of highly ionized gas and metal vapors known as a plasma.

TIG - TIG is most commonly used to weld thin sections of stainless steel and light metals such as aluminum, magnesium, and copper alloys. The technique grants the operator greater control over the weld than competing procedures such as shielded metal arc welding and gas metal arc welding, allowing for stronger, higher quality welds. However, TIG is comparatively more complex and difficult to master, and furthermore, it is significantly slower than most other welding techniques. A related technique, plasma arc welding, uses a slightly different welding torch to create a more focused welding arc and as a result is often automated.