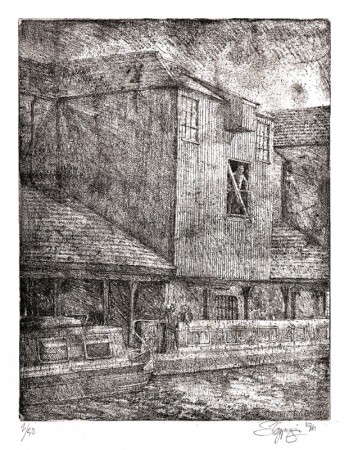 Canals were the internet highway of the late 18th century. They were the new life-blood of any town's economy, and vast fortunes were to be made.

He lived an unenviable existence, latterly on the back of his horse. He would spend little more than a fortnight in each place, the next canal builder or town clamouring for his time elsewhere.

This approach was unconventional, but tolerated, as was the fact that Brindley would, of course, go on to work for his current employer's commercial competitor. His results spoke for themselves.

Brindley began work in Coventry, but after not much more than a year into construction, the high standards that he demanded became too much for the company who were already struggling financially. They dismissed his services at more or less the point that the new Coventry Canal was joining the Oxford Canal at Hawkesbury Junction.

The result has become a monument to this lack of forsight. The levels at Hawkesbury were some 6 inches (150mm) different from each other, as well as being a good distance out of line with each other. This caused serious problems in both engineering and economic terms.

My proposal was to place a lifesize bronze of Brindley, watching the canal basin from his 'darkened room'; and an identical bronze standing on the bridge at Hawkesbury Junction, looking towards Oxford. But this was not to be!