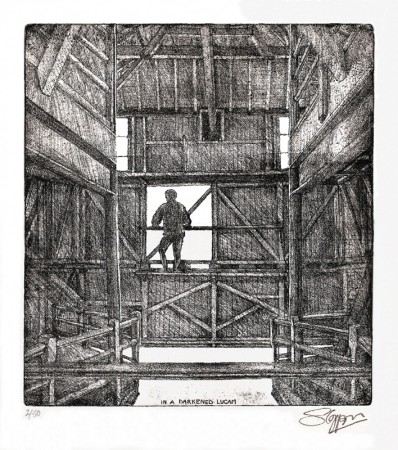 IN A DARKENED LUCAM

After some time working on Coventry Canal, it became clear that it would be necessary for the smooth working of the canal to allow their competitors an advantage at the end of the canal towards Oxford.

Brindley began work in Coventry, but after not much more than a year into construction, the high standards that he demanded became too much for the company who were already struggling financially. They dismissed his services at more or less the point that the new Coventry Canal was joining the Oxford Canal at Hawkesbury Junction, causing serious problems in both engineering and economic terms.

The first part of my proposal, as depicted in this etching, was to place a lifesize bronze of Brindley watching the canal basin from his 'darkened room'. This building is in fact a 'lucam' a tall structure for loading canal boats from above.

The second part of the proposal was to place an identical bronze of Brindley standing on the bridge at Hawkesbury Junction, looking towards Oxford. But this was not to be!